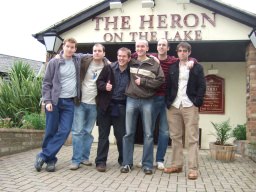 The Heron was excluded from the crawl until 2007 when by an almost unanimous decision it was decided to expand the boundaries (although we haven’t updated the constitution for this).

The Heron has a look inside of being an old-worldly place, however it used to be an American bistro restaurant called Dakotas so we know that all the old wood is basically just window dressing. The beer and food  isn’t bad though!